I've written a fourth book in the Dovetail Cove series and it drops on August 27 from BookTrope Editions. It's going to delight fans of the series while creeping them out at the same time. Like before, I wondered what readers expect the new book might be called. The first book was called BLED, the second was SHED, and the third was DREAD. Hmm. Ho hum. Oh how I wonder what the next story might be named! 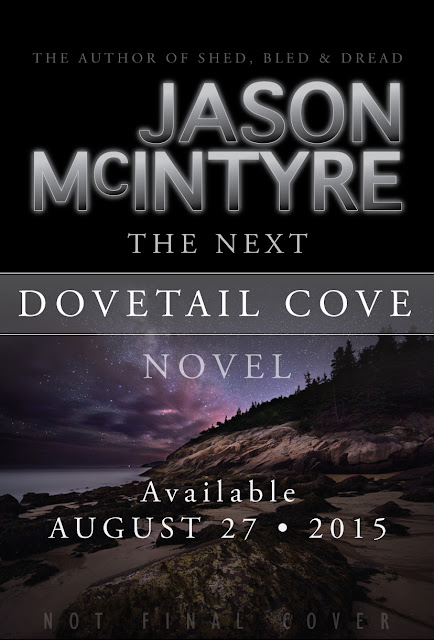 So, here's how it's going to go down. The contest entry form below garners you a pile of entries for liking my Facebook author page, following this blog or sharing word of the contest. What can you win? A SIGNED paperback copy of the new Dovetail Cove novel delivered to your doorstep.

Do you have to guess the actual title to win? Nope. Have at it, have some fun. Some awesome guesses from before include FRED, BEDSPREAD, CORNFED and BEDHEAD. I love those. I chuckled. Really, I did.

I'll randomly draw a winner from all the folks who leave a guess, whether it's funny or serious, wrong or right. Meaning, you don't have to guess the actual title to win. You just have to take part. You get WAY more chances to win if you complete more of the options in the raffle. Tweeting the contest gets you 5 additional entries, for example. It's easy-peezy.

So! On to the the book. What's it called? That will be revealed after the contest concludes. I swear.

And what's it look like? That, too, shall be revealed. We'll see the fancy-schmancy cover after the contest. And it's really good. It's the first of my book jackets to be designed by another graphic artist. His name is Greg Simanson and he's the bomb. He's done an amazing job with this book jacket.

What's the new book about? Well THAT, kind friends, I can share.

About the New Book


The first novella, SHED, was released in 2010 and tells the tale of two isolated boys in 1977 dealing with a mean stepfather and creepy basement visitors north of the creek in an island town called Dovetail Cove. Reader response was overwhelming so I returned to the island with a prequel called BLED -- released in 2011 but set in 1972.

DREAD (released in 2014) fills in the gaps and links BLED and SHED together while setting up the DC saga for new books and a stunning conclusion. The new book ties directly with all three. Yup. The web in Dovetail Cove is getting stickier and even more difficult to escape.

It’s the waning dog days of August, 1975 and Tom Mason’s in Dovetail Cove for the last few weeks of his summer job at the group home. His boss and the home’s owner is Karen Banatyne, one of the wealthiest folks in town. It seems like she’s got it in for Tom; she's the only one standing in his way as he scrimps for a new camera.

But Karen has her own problems. A regulatory agency might cut off her funding, plus her hubby hasn’t been seen in a few weeks, and she’s not saying why. Most ominous of all, it seems as though something’s hiding in the hot spring north of the main beach and one of Karen’s ‘houseguests’ is about to come face to face with evil. Tom is too.


Drop in a guess for the new book's title and spread the word about the contest and you could win yourself your own copy of the new book or one of six e-copies of BLED, SHED and DREAD (2 e-copies of each title). I'll sign the print copy for the lucky grand prize winner and I can e-sign the ebooks for the second prize winners.