Hi Everyone! I know. I've been an awful tease most of my adult life. And not just with book-related stuff. But, I'm here to announce that The Devil's Right Hand is now available -- at least in a few places. I'm not doing a big book launch this time. There will be no fireworks. It's been an awful year with all kinds of lows and highs. Quite frankly, I'm exhausted. But I'm so happy with the final novel and simply wait for you to read it.

So, what's the book about? It involves a group of mystery men and women who are dubbed The Night Walk Men. Unseen and unknown by you and me, they manage the lives and deaths of countless members of their human flock. This book follows the events of a novella called The Night Walk Men, released in 2010. In that story, we meet Sperro, his brother Fallow and their father, Obsidion. I won't ruin that story if you want to check it out, but more than forty years have passed since the events of that story and we pick up with Sperro and Fallow continuing the work of the Night Walkers.

Here's the official blurb for the novel:

The saga began with The Night Walk Men, the #1 Kindle Suspense novella by Jason McIntyre. Now it continues with The Devil's Right Hand. And a war is brewing.


Meet Benton Garamond. He's lost. He careens through the wet streets of downtown Vancouver on a collision course with a dirty lawyer named Levy Gillis. He wants something from Gillis and he aims to get it.


Meet Donovan Lo, former drug kingpin and not bad with the ladies if you ask him. He's in hiding and has a plan to leave his empire for good. But something -- and someone -- aims to put a bullet through his last big score.


Now meet Sperro. He has a lot to say about his job, about Benton Garamond and about Donovan Lo. Sperro will be your tour guide.


"We are Night Walk Men, imbued with the lives of at least ten men, and we walk among you like a blur, unseen but often sensed or smelled like pollen in the air when you can't see flowers--or the tingle you get when the hairs on your neck stand up.


"If you hear footsteps on the parched earth behind you, or if dry autumn leaves scrape concrete with a breeze, that's most likely one of us, walking just a little ahead or just a little behind. If it's dark and you climb into your car and for once--for no reason at all--wonder why you didn't check the back seat for strangers, one of my brothers is mostly likely back there as you drive off.


"We are everywhere at once and nothing can stop us. We are Death incarnate, walking under long robes of black and chasing down the winds to read from a discourse that may be the last words you'll hear..."


Be prepared to shake The Devil's Right Hand.

Find the book at:


I also thought it might be fun to share the chapter titles and contents of the novel. Don't worry. There aren't any spoilers here. (Those of you who know me know I loathe spoilers. I'd never do that to you) But some folks will dig seeing these chapter titles. It might make it feel more real. For me it does.

The book is about five hundred print pages, a longish one. It's comprised of sixteen long chapters separated by sixteen short interludes. Hope you enjoy seeing this. Let me know if any of them sound particularly intriguing or if you hate every last one. 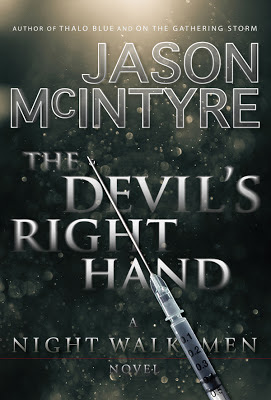 I. The First: Benton Hits the Brakes

XIV. At Rest With the Fathers