The holidays are right around the corner, and though I haven't finished wrapping (or even buying) gifts for my loved ones, I thought it might be fun to give a whackload of gifts away to my friends and followers. 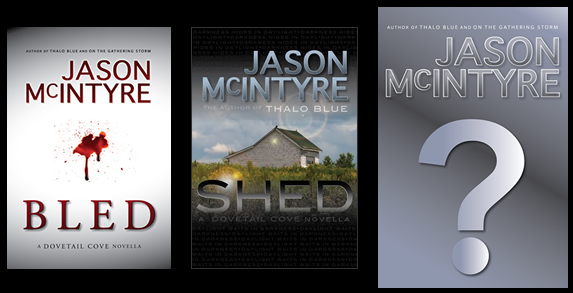 Through the wonder of NaNoWriMo, I'm writing the third book in the Dovetail Cove series and I wondered what readers expect it might be called. The first book was called BLED, the second was SHED. Hmm. Ho hum. Oh how I wonder what the next story might be named!


The novella, SHED, was released in 2010 and tells the tale of two isolated boys in 1977 dealing with a mean stepfather and creepy basement visitors north of the creek in an island town called Dovetail Cove. Reader response was overwhelming so I returned to the island with a prequel called BLED -- released in 2011 but set in 1972.

This new story fills in the gaps and links BLED and SHED together while setting up the DC saga for new books and a stunning conclusion.


"I suppose I knew more about Macedonian McLeod than anyone else on this earth, but l still knew almost nothing. He was a beer-and-peanuts kind of guy. He smoked Viceroys and he liked titty mags, but only the tasteful ones, no man parts in 'em. He never looked at the hardcore stuff. What else. Hard to think of more. Meat and potatoes over vegetables. Steak and lobster was his favourite—surf 'n' turf, they called it further down the coast, California-way. He liked a good clam chowder if it had the right stock. And fruit was for fruits."


Drop in a guess for the new book's title and spread the word about the contest and you could win yourself one of three print copies of my debut novel, ON THE GATHERING STORM or one of six e-copies of BLED and SHED. I'll personalize and sign the print copies for those three lucky winners and I can e-sign the ebooks for the other three winners.


The winners have been notified. Learn the name of the new book!