Behind The Words // David Lender

I met Author David Lender through his acquaintance with a good friend of mine, Eden Baylee. She said, "Hey, check this guy out!" I did. And it began a connection that has, thus far, culminated in David coming to the Reaches to hang out.


More about David, and, boyohboy, it gets interesting: He's the bestselling author of Vaccine Nation, Trojan Horse, The Gravy Train and Bull Street. He spent more than 25 years on Wall Street before becoming a full-time novelist. David now lives in northern New Jersey with his fiancé, future stepson and their beloved pitbull, Styles. More on David can be found at www.davidlender.net or at his Amazon Author Central page. 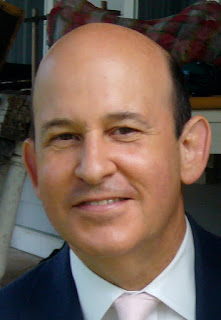 When people ask me where I write I usually laugh, because there’s no pattern. When I started writing seriously, about 15 years ago, my investment banking career was in full swing. I got up at 5 a.m., exercised, and then wrote for an hour or so before going to the office for my day job. I’d edit or outline new scenes on planes, in cabs, in conference rooms during breaks in negotiations on deals, anyplace.
Today, it’s not much different. I get up, work out, then work. Some days I stay downstairs in the library and dictate on my Dragon software on my PC laptop. Other days I make notes, outline or type on my mac in the library. Sometimes I go up to the attic and work in my writing studio on my mac or Dragon PC software. Or I make notes, edit or draft scenes longhand wherever I am: on the bus to New York, on a chaise lounge by the pool, wherever. Usually Styles, our pitbull (pitbull owners call them pitbulls, not pit bulls, just as Porsche owners pronounce the name of their cars the way the Germans do: “Portias,” not “Porsh’s”), is next to me on the sofa. He’s just over a year old now, and loves to alternately sleep by my side, lounge with his head in my lap, and get in my face to play ball with him when he decides he needs exercise or attention.

Styles is getting more attention these days, since I’ve just released Vaccine Nation, and am only just outlining my next book. That, and writing entries in our family memoir on our first year since adopting Styles. The memoir process is less intense that writing a novel, and Styles’ memoir may take us a while to finish. My next novel is probably six months away. It will be a prequel to my first novel, Trojan Horse, featuring Sasha, the heroine of that book. She’s a character that most people responded enthusiastically to, and one I had a great time getting to know during writing that book. I’m looking forward to seeing how she develops in the next novel. 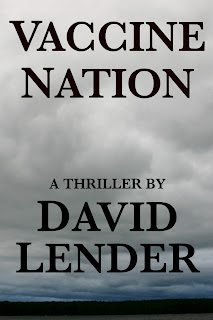 Gearing up for my next novel will put me back in my more structured mode, and I’m girding myself for it. I’m an outliner, which is my nature, but also my training. My editor, Richard Marek, who was Robert Ludlum’s editor for his first nine thrillers, including his Bourne books, taught me to write detailed, scene-by-scene outlines of my novels, and then biographies of my characters. It gives me a structure to work with so I know where I’m going, even though I frequently deviate from the outline as the characters dictate. I also use a cork storyboard and stick 3x5 cards on it to lay out my story, something I learned from a Hollywood scriptwriter. Once I start writing in earnest, I dictate my first drafts in my Dragon software, then edit extensively, often completely re-writing scenes from scratch. I try to average 1,000 words per day, which means if I’m not productive every day, I’m playing catch-up. For many writers, that’s peanuts as an objective, but for me, I find it’s a level that allows me to balance discipline with producing quality.

All of the above relies on some level of domestic tranquility, or at least stability. My fiancée of nine years (we’ll get around to it eventually) is accustomed to my new career as a writer, and supports me in it, although sometimes she’s a little mystified that some sweatpants-clad Fred Sanford is sitting unshaven and unshowered in the library in mid-afternoon, still dictating or typing if I’m on a roll and don’t want to stop. She generally shrugs and gives me my space. Styles can be more demanding, showing up with his ball and not taking no for an answer. We all work it out.

You can learn more about me and my writing at www.davidlender.net. My latest novel, Vaccine Nation, is now available on Amazon.


Come back any time, David. So glad to count you and your writerly world among the talents who have stopped by this little space in the Reaches. Wow. Getting up at 5 a.m. to write AND workout. That's commendable. My thanks for stopping in!
Posted by Jason McIntyre