Behind The Words // Ryan Dalton

It's refreshing to meet someone so forthright about their goals and aspirations. Ryan Dalton is writing his first book and he's gearing up to let the world know about it. He's approachable, funny and really enjoys the networking aspect of being a writer. Plus, Ryan has recently started a blog, www.ryandaltonwrites.com, where he aims to talk about his writing process among a myriad of other topics.

When you're done with our impromptu chat about such things here, I invite you to head on over to his new blog or find him on Twitter to get in touch with this personable writer. So, without further commentary from the peanut gallery (me), I present writer Ryan Dalton... 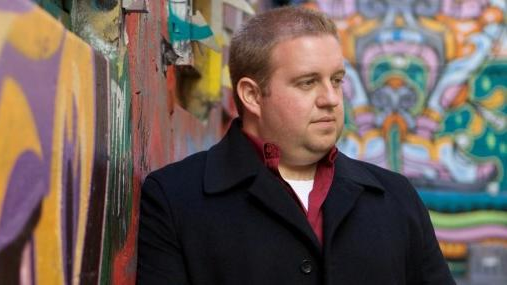 I’m Ryan Dalton. I became a writer after facing the truth – I will never be Batman. After getting over that disappointment, I moved on and found a new passion. I’ve dabbled in different types of writing over the years - comedy for a humor blog, review and viewpoint pieces for several news blogs, articles for a local magazine. In 2009, I placed high in the NYC Midnight Short Screenplay Challenge, and last year I sold a short screenplay. Currently, I’m working on my first novel, a YA sci-fi thriller titled The Year of Lightning.


Ryan on his writing space...

Yes, I often do write in space. It’s quiet up there, and the orbit is somewhat soothing. Though, I still can’t figure out how to keep my laptop from floating away, and this space sheep is always grazing on ozone near my pod window, which can get distracting. Oh wait, when you said "writing space" you probably meant….okay, never mind that last bit.

My writing space constantly changes because I don’t like writing at home. Everything’s too familiar, and the clown in the corner won’t stop staring at me, so I will usually flee from my house and find somewhere else to write. It could be in a coffee shop, outside on a bench, in a pub, anywhere that feels comfortable at that moment.

Music is usually part of the routine, but I never listen to anything aggressive. Lyrics and aggressive beats distract me from the words in my head and tend to throw off my rhythm. I mostly listen to ultra-mellow relaxation music. It’s less about entertainment and more about being insulated from my surroundings. I do put together soundtracks for my stories, though. It helps me envision how a character moves, acts, and speaks, and helps me define the mood and rhythm of a scene.

Ryan on his current work...

When I write, I usually work on my novel, The Year of Lightning. It’s about teenage twins who move to a small town and realize the long-abandoned house across from them has no doors – only windows. No way in or out. Then one day, they see a face staring at them through the window. As the mysterious activity inside the house grows, so do the lightning storms that are suddenly plaguing the town. Who is in the house? What are they doing there? How is the house connected to the lightning? The twins, and a few unexpected friends, confront a mystery that threatens their town’s existence, and the only clues are written in the sky.

Ryan on his technique...

For novel-writing, I use a timeline, and have found good success with that. The story has a lot of moving parts, and a timeline has helped immensely with keeping ideas organized, placing scenes in the proper order, and nailing down the core rhythm and mood of the story. It’s also helped establish themes, ideas, and even specific scenes that I want to explore in the second and third books.

If there’s any part of writing that I’m the most self-demanding about, it’s dialogue. It’s by far my favorite part of writing, and I believe the life-blood of most good stories. If characters don’t interact in a believable way, it throws everything else off. You have to write characters like living, breathing people.

I write mostly with my Macbook. If I’m out doing things and get a great idea, I’ll usually take a seat and make notes in my phone, then transfer them over later. As for editing, I take a hybrid approach, tweaking and adjusting as I go, then making broader fixes on subsequent read-throughs. I’m not the type of writer who does one draft and moves on regardless of the issues, because those issues will continue to weigh on me until I fix them. If I’m going to write well, my mind has to be clear of those distractions.

Ryan on his surroundings...

I’m single and share a house with my brother. Most of my writing doesn’t affect him much, since I do it away from home. However, the oddities of being a writer do spill out sometimes. He has learned the eccentricities of my writing style and is no longer surprised by them.

When we’re out on the town and I get a look in my eye, then sit and start typing something in my phone or writing on a napkin with no warning or preamble, he just rolls with it. When I finish a long session of reading or writing and emerge glassy-eyed and fuzzy, like I’m not quite back in this world yet, he doesn’t ask me important questions or talk too much until I’m fully back in reality.

My blog, Ryan Dalton Writes! www.ryandaltonwrites.com is brand new, and I’m still learning the ropes. Articles focus on writing, geek culture, and the combination of the two. I may occasionally throw in other topics that catch my interest and ask my fellow writers to do some guest spots. And sometimes I’ll post something completely whacky, with no reason or explanation.


A massive thank you to Ryan Dalton for sharing his time with us -- Ryan, my hat remains off for you. We would love to have you back when there is writing to share or more news about your experiences in finishing this first book of yours.