Behind The Words // Al Boudreau

Al Boudreau. Novelist. Indie supporter. Tweeting mad man. There are more titles for Al, but he'd probably appreciate this one the best: friend to authors across the world.

Al is also a member of the decision committee for the 2011 Farthest Reach Award, dedicated to recognizing outstanding members of the book marketing community. Al's going to be working with the team to winnow down the nominees and decide who's the cream of the crop. For my money, Al has the chops and the experience necessary for this task, no question.

I met Al on Twitter late last year and came to know more about him and his work, plus his undying camaraderie among the Twitter faithful over the last several months. He's quick to pour you a virtual drink and quick to sing your praises if he believes in you. And, he's been known to write a cracking thriller now and again. About his work, about his space, and about how he does what he does, I present Mr. Al Boudreau...in his own words...


My pen name is Al Boudreau. I decided to change my real name to Al Boudreau too, so as not to confuse people. My debut Mystery/Thriller, IN MEMORY OF GREED, came out at the end of January, 2011. It is presently available in ebook format for Kindle and Nook. 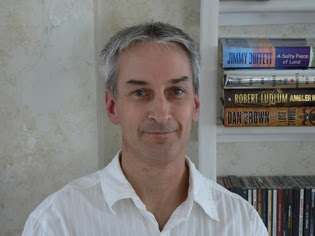 I write while sitting on the couch in my living room, netbook in my lap, and notes/outline by my side. It's the most comfortable spot I could find. I'll nibble on an occasional snack while writing, but find it difficult to write with any kind of noise. Therefore, I try to maintain a silence that would rival most monk's surroundings. My sheep ran away months ago. Too quiet for his taste, apparently.

I utilize both a netbook computer and composition notebooks when I write. Generally, I can produce one or two chapters a day, if writing is all that's on my docket. I generally rough-edit chapters the following morning, before writing the new day's work. Once my manuscript is complete, I'll read it through and edit again, before passing it along to beta-readers. 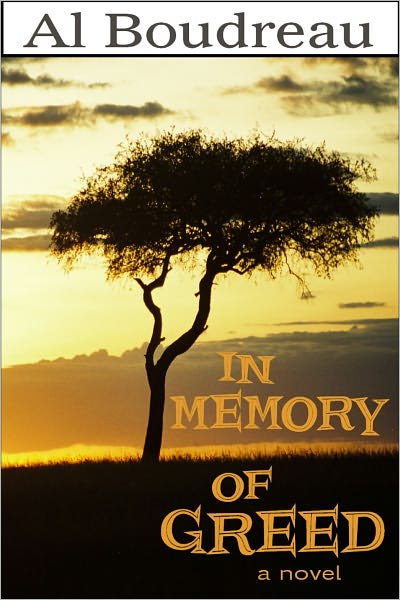 My significant other, Jennifer, is very supportive of my work. She is a very astute, well-read individual. I find that her opinions, and advice, are spot-on 99.9% of the time. I highly value her input during the writing/editing process. She's very good about helping provide the environment needed to produce quality work.

These days, I'm working on creating an author platform. I fully believe in doing things bass-ackwards---writing and self-publishing a debut novel first, then building my platform. You'll notice that nowhere in this Q & A did I say that I was very bright. My journey is quite similar to that of the protagonist in my novel---just when he thinks he's making headway---BOOM, the antagonist schools him once again. The antagonist in my world is time...as soon as I need some, it conveniently seems to disappear. However, like my protagonist, Murhkin Mocado, I shall persevere.

I've established an unwritten rule for my own work---my storylines must be completely plausible to anyone and everyone who reads them. I've never cared much for books or movies that push the envelope too far outside the realm of real-world possibilities. That being said, I thrive on throwing jarring facts about wrong-doing at my readers. I want my work to make people sit up and take notice of abuses concerning money and power by big business and governments. At some point these abuses will stop. I fully intend to be part of the catalyst for that change.

Visit Al Boudreau at his blog, http://alboudreau.wordpress.com where you can click on links to his Twitter home, current novel, and more. Al, my biggest, hugest, warmest thanks for allowing me to host your words here at The Farthest Reaches!