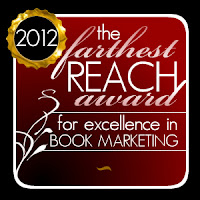 A short time ago, nominations opened on The Farthest Reach Award, with the goal of giving kudos and high-fives to indie and pro writers, publishers, book professionals and readers who are doing a bang-up job of marketing themselves or their industry. Learn more about the Award here and please consider making a nomination of support for someone you feel deserves recognition.

The time has come to make another announcement. I won't be doing the deciding on who gets these accolades alone. That falls to a prestigious group of my esteemed colleagues. This year, the group consists of indie and traditionally-published authors, men and women, fresh and seasoned. There are some interesting, talented and wonderful people here and I am honoured to call them not just my peers in this crazy writerly world.

So who are they? I invite you to learn more about them and follow any links back to the committee members' own websites or Twitter pages to connect with them. All hail the deciders!

Alison DeLuca > A lifetime ago, Alison was a Spanish teacher, trying to make bored adolescents learn the subjunctive mood. Now she is entertaining those same kids with her stories of a steampunk computer and a magical governess from the islands, when she’s not playing Barbie with her daughter. She is also an editor for Fantasy Island Book Publishing, the same group that brought out her trilogy, The Night Watchman Express, and its sequel, The Lamplighter’s Special.

L.M. Stull > Originally a Washington, DC native, L.M. Stull now resides in Southern Virginia. She has always been a creative person and studied classical piano and dance from a young age.

During the day you will find her chained to a desk at a law firm. Yes, she works for lawyers. Now you understand why she writes about creatures . . . Boom! At night she channels her inner creative monster and writes (sorry, she doesn’t turn into a werewolf or anything).

Her debut paranormal romance novel, Memoirs of a Monkey, will be published by Black Kettle Publishing Summer 2011. Find Lisa on her website or Twitter.

Imran Siddiq > Imran greets us from Leicester in the UK. "I distinctly recall the applause I would receive for my creativity as a young 8 year old boy, but I never truly grasped it, mainly because of my education forcibly taking me into new frontiers. Well that changed 4 years ago. Now, every flutter of spare time is thrust into drawing, creating and writing. Not yet published, but I have a web of tales to be told. My first novel, inspired by my two precious cats is complete and is undergoing sensible editing, and I am close to finishing my second novel. Details of how I am progressing can be found on www.imranwrites.com and on Twitter: @flickimp ."

Al Boudreau > Hailing from Maine, Al's debut Mystery/Thriller, IN MEMORY OF GREED, came out at the end of January this year. It is presently available in ebook format for Kindle and Nook. Al is active in social media, self-promotion and also becoming a distinct voice for independent authors all across the web. Look for Al at his popular website or on Twitter.

J. Alex Greenwood > "I reside in Kansas City with my wife and daughter. My grandfather was a midlist Western and historical fiction writer who encouraged me to write. I've written the thriller novel Pilate's Cross, the award winning short story Obsidian, a half dozen or so failed book manuscripts and thousands of press releases in my day job as a public relations consultant." You can find Alex at his website or on Twitter.

Please note that new members may join the committee before deliberations begin. Remember to get your nomination in soon. Nominations for The Farthest Reach Award close on August 31, 2011.