Behind The Words // Road Markers 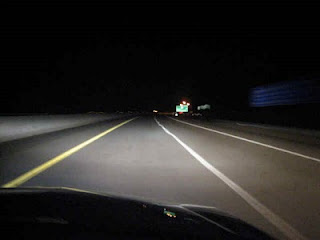 Every so often, I hope to post short anecdotes about the impetus behind some of the characters, backdrops or ideas expressed in my writing.  Up now is a little depth regarding my short story, "Road Markers" which is available for free at Smashwords.

There's a section in the story, "Road Markers" which has Dean thinking back on a perhaps imaginary memory from his childhood which may or may not have happened. In the stream of consciousness we peek in and witness him as a boy, possibly taking a summer road trip with his family and seeing his "companion on the road to another world" in the back seat of another car.

It was one of those instances where you’re doing a hundred or so down a road and, in the lulls when the radio signal’s gone and your own thoughts are nothing but muck, you notice the same car ahead of you as you did a hundred klicks back.  You’re never sure, no, no, that it’s actually the same vehicle.  But you feel like you’ve been driving with that car for a while.  And you always feel a momentary nag of sadness when it turns off, when you realize it had no shared business with you.
When you were a kid maybe you imagined a beautiful girl in that car, the same age as you, bored out of her brain too, on some pathetic effort of her father to culture the family during their vacation instead of just going to some theme park and staying in expensive hotel rooms where there was a cheesy three-storey resin plastic waterslide in the pool area.
She, that beautiful girl in the back seat, would have her chin in her hand, semi-tanned legs with white lines where the band of her sandals sat on her pre-summer feet, pulled up on the seat.  Dad was in the driver’s seat, middle of the night and pushing on to the next stop despite mom’s protests from the front passenger seat that it was too late to keep going.  But dad, no he had an agenda and he was sure there was a rest stop here that he remembered.  One with a map on two wooden posts and a garbage can and a widened shoulder with a path that led down to a view of the valley and the glittering Oceana beyond.  He was leaning forward over the wheel looking for that path, dear old dad, looking for that rest stop because it was part of the culture, part of the knowledge, part of the life, he was trying to give his daughter.  And his wife.
And in another life, when you were a boy, you’d journey along in the back seat of your own dad’s car.  You’d pull up alongside and overtake beautiful back-seat girl and her dad and mum, when your pop came up to the passing lane, a third lane that widened for a brief stretch of a few kilometers.  And you’d see her there, with shiny hair caught in some glare of a headlight in the opposite lane, shadows tracing and then falling away from her features.  She’d see you and you’d spend the rest of your own holiday with your parents wondering what she was like and if you’d amble up to your hotel room with key in hand (that you’d begged mom to let you carry) to find that she, boyfriend-less and missing her own friends back home, was in the room right next door.  And, oh yeah, both rooms had a direct view of, no not something cultural, not something natural or beautiful, but instead the bright blue tub-tubes of resin plastic:  the three-storey waterslide.
A magical thought, the other car.  The voyage buddy, the companion on the road to another world.  It was even, for me now, epicurean to imagine the lives in that other car.  They were going the same place as me, caught in the time-warp of a highway between two spots in the night.  But likely, they headed there for very different reason.  God, I hoped so.

This runs runs parallel to how Dean sees his life being piloted in the present. He's stuck in the back seat at work, feeling overwhelmed and unfairly managed by his boss, LeFevre. Dad's driving the car to a predetermined destination and Dean feels like he's in the back seat, unable to steer or influence the direction of the car. All he can do is sit still and be content to look out the window, watching the world pass him by: his ex-wife getting a plumb new job in Japan before finding a new fiancé, his semi-estranged step-daughter growing up and moving on with her life.
But now, at the moment of the story, he's truly in the driver's seat. He can take that car in any direction he wants. The question is, where will he go?
Posted by Jason McIntyre