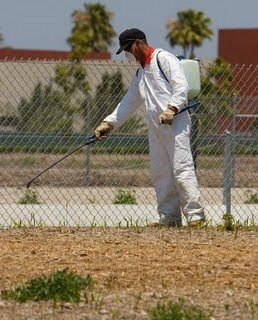 Driving to work this morning, I saw a man in a haz-mat suit with a surgical mask and plastic hood. This was in a very busy downtown area, filled with people getting coffee, newspapers and hurrying to work in the surrounding office towers. The man was carrying a large plastic jug of blue liquid connected to a spraying nozzle. The nozzle was dribbling the blue liquid onto the pavement and concrete as he stumbled through an intersection, stopping the cars which had the right-of-way to keep travelling. He waved.
If this blue chemical is safe for all the folks getting coffee and walking their dogs, why's this guy in a plastic onesie and a Michael Jackson face mask?
<>   <>   <>
Yesterday a beautiful female pedestrian was crossing a busy street at a designated crosswalk while the crosswalk flashers were lit. A car came to a screeching halt a few feet from her and layed on the horn, apparently thinking she shouldn't be in his way. She threw up both her middle fingers and yelled the f-word at the driver before he sped off. Disconcerting for all, but why such extreme measures? Just the adrenaline of such a close encounter? Or did each person genuinely believe they were "in the right"?
Are we all on increasingly on edge these days or is it my imagination?


<>   <>   <>
Saw "Inception" the other day and was mostly impressed. Came out of the dark theatre into the harsh light of a sunlit parking lot appreciating the fast pace and depth of the story but feeling hungover and dense with a fog of the mind. Wondered how "the masses" would truly enjoy something so "heady" and also wished for a better explanation of how you and I could lay down next to each other and share a dream space.
Went to a nearby sushi place to think it over, learned that my dynamite rolls would be a few minutes so went to pick up a case of beer. Reached into the cooler at the liquor store and the bottom fell out of the six-pack carton of Heineken. Dropped six bottles of beer onto a concrete floor where they erupted onto me, the coolers, the walls. Stunned, still stuck in the head space of the movie, I backed away as the manager and all store occupants converged on my location to see if I was okay.
Covered in beer, I retrieved my sushi and went home. Had I just experienced my own dream within a dream?
Posted by Jason McIntyre