Every so often, I hope to post short anecdotes about the impetus behind some of the characters, backdrops or ideas expressed in my writing. Right now, a short note about the "happy accidents" that can occur when combining two ore more notions into something meaningful. 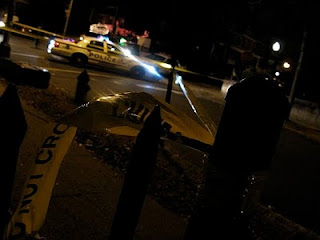 A lot of writing is about choosing the correct details to share about a scene, a character, or a moment in the story.  It's really the same for a lot of different creative mediums.  Just have a look at this set of "perfect moment" photographs to get a sense of what I mean.

Here's a moment from my novel, "On The Gathering Storm" that involves a car crash. It's based on a traffic accident that I was involved in but in re-telling it, I focused more on the feelings one would have in such a catastrophe and less on the choreography of the vehicles. In the end, I stumbled across the final bit of dialogue from an anecdote a friend once told me, and the two bits came together quite well, I think.

And then things come to rest. Like whirling tops on kitchen linoleum, finally exhausted, finally seeing the pointlessness in their childish play.

Hannah is a wakeful corpse, witness to the event, yet unable to see. Unable to move. When she finally does move and gets out of her car, it’s dreamy and far off—-like watching the events on television instead of living through them. Later she’ll remember the bloodied foreheads in the other car. They are both moving, moaning, incoherent when she asks them if they are okay. And then, dreamlike, wafting as smoke from a firearm on a breeze, she’s moving to the ditch where D.’s Prelude has been flung.


In telling a story, finding those ideal spots or details is not much different than a similar moment in photography when patience, timing and the gut feeling you have when you find those great shots all converge. Sure, you need to have inspiration strike, be in the right place at the right time, but you also need to have some idea of what you're doing with your f-stops and your flash bulb.
Posted by Jason McIntyre