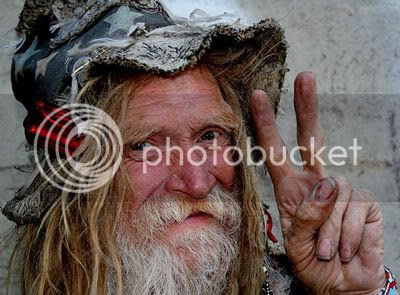 On the way home one afternoon, I spotted a seasonal greenhouse alongside the road proclaiming a sale on perennials.  I stopped in to buy some day lilies and some chicks n' hens.  The purveyor was a grizzly, past-middle age man with an unkempt beard and long hair. Quite honestly, he looked like the hippie that time forgot.  But he was pleasant as all get-out and knowledgeable about plants, to boot.  We got to talking as I looked over his plants and he continued to give them a long drink on this hot summer day.  I asked him what he did with his time during the rest of the year and he told me that he spent his winters in Thailand, building Orgonite towers and introducing them into the canals and other bodies of water.
Now, I don't know a thing about orgonite or its proported powers, so if you're curious about it, check out some information here. What I do know is that the friendly old hippie dude at the greenhouse believes this material and these towers are essential to help "cleanse" the earth, bring balance back to nature and that his plan is to introduce ten thousand-plus of these towers into the water in Thailand and other places around the world this year, and thousands upon thousands more each season for as long as he remains upright and breathing.
He genuinely believes that his efforts are going to help save the earth.


I'm not going to judge him or his work. Nor am I going to say that I believe in the powers of this material called orgonite or whether I think it is, as Sheldon Cooper might say, nothing but hokum.
But it did get me to thinking about a person's "life's work". I'd certainly like to reach my inevitable and (hopefully natural) end, knowing that what I largely spent my time and energies on in my days on earth was worthwhile. Meaningful. Maybe even helpful to humankind and the planet we call home.
I do wonder, though. When the green-thumbed hippie gets to whatever his version of the Pearly gates is, will someone tell him that all the metal shavings and plasticine he dumped into the rivers and oceans really helped us all? Or was it a complete waste and he should have done something else with all the time and talent he was given?
Posted by Jason McIntyre