The Story of "Mr. Mean Man"


Every so often, I hope to post short anecdotes about the impetus behind some of the characters, backdrops or ideas expressed in my writing.  Today, it's a spark from my real life which ignited into the character known in the opening chapters of "On The Gathering Storm" simply as Mr. Mean Man.
<>  <>  <>
I was living on Vancouver Island and had headed out to catch the summer blockbuster in Colwood, at the same theater, in fact where Hannah heads off to see a flick in the opening chapter of the book.  So I was standing in line next to this older, rather twitchy looking man who had a bald crown and a long greasy mullet hanging down past the nape of his neck.  He was wearing torn and paint-spattered jeans and eyeing the teen girls hovering around the concession stand with a kind of leer that is not uncommon among middle-aged men but is still creepy. 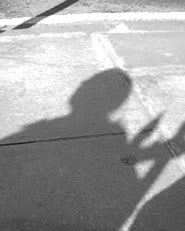 For some reason, he decided to strike up a conversation with me and I learned that he had already seen a movie that day and had been in the men's room for the last forty-five minutes until he snuck out and hopped into the waiting spot to see a showing of one of the Spider Man movies.  That's when our paths crossed and I guess I wasn't appalled enough at his confession so he continued talking to me, with a snorting laugh, the kind that reminded me of that crazed, raspy one of Elmo Blatch's, Tommy's cellmate from The Shawshank Redemption.
He kept looking the girls up and down as he asked me where I was from and told me a bit of his story.  He grew up on the island and now had a place he shared with his elderly mother, a large, treed lot out by Thetis Lake, overlooking the water.  He was building a house by himself, from scraps he found and some he bought, and in the meantime, he was living in an RV trailer parked in the tall grass, off the road.
When he learned that I was at the theater alone, the same as he was, he invited me out to his "Place by the Lake," he called it.  I was relieved when the usher opened the doors to the auditorium and let us in.  I used the opportunity to head to the men's room myself, then pretended to get lost in the shuffle of kids and teens and their parents all bustling through the double doors with their popcorn bags and cokes.  After a cool splash of water on my face, I headed back to the auditorium and managed to find a seat away from the man in the paint-spattered jeans, in the last row of the theater.  I could see that he found a chair off to the side, a little further down to the front, where he wouldn't have to stand up to let anyone pass, but could continue to study the girls as they chatted and giggled.
There was something amiss about this strange fellow.  Though I doubt he had anything on his resume as nasty as Mr. Mean Man from my novel did, to this day, I still have a rigid formula whenever I go to a movie theatre.  I head straight for the very last row and I sit with my back to the wall...and a clear path to the exit.
Posted by Jason McIntyre